Hey! It’s Sunday, time to review what yummy stuff I had this week.

Let’s be logical, and start from Monday. As usually, lunch at the Japanese restaurant. That day it was a meatball with a sauce that seemed to be like between goulash and Okonomyaki sauce. Reaaaally good. 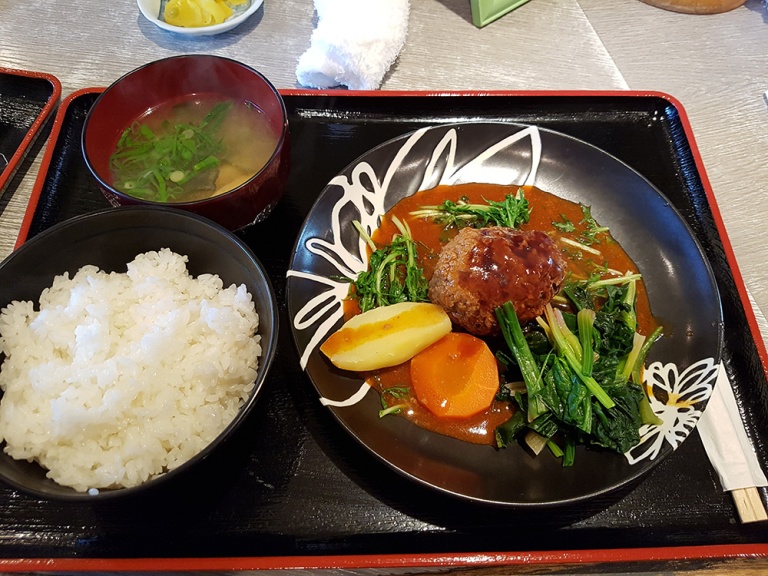 For dinner, I did another try on Crispy Shrimpy in the oven, aaaand… I still don’t know how to make that bloody oven work properly. But it was fine. 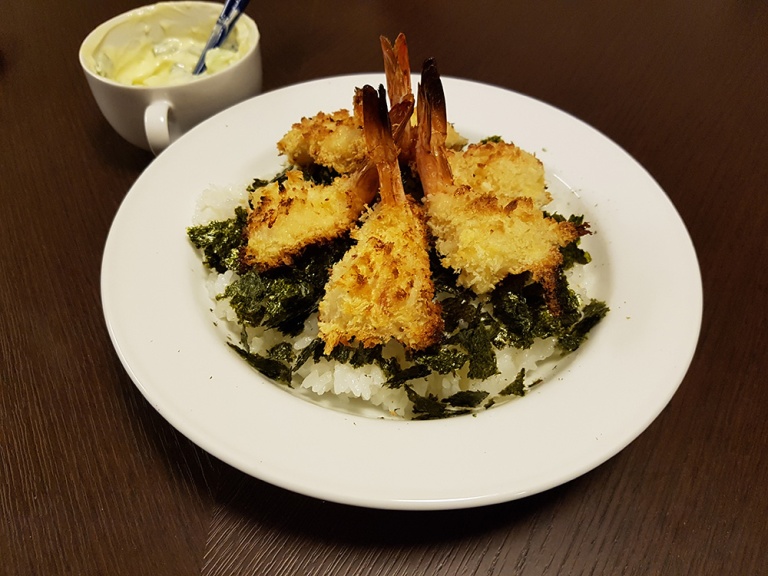 On Tuesday the main dish was tempura fish. The fish was so soft that you actually eat it with the bones but don’t feel them. And as side dish there were two mini sausages and bamboo shouts salad. 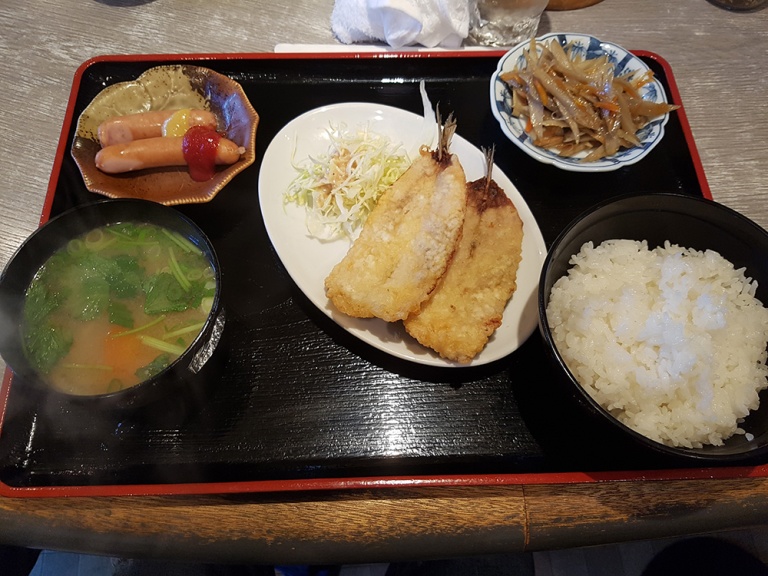 For dinner I decided to make some Udon in a miso soup, with Konjaku, green onions, Wakame seaweeds, eggs and sesame oil. But I made way too much — like 1L of soup — and didn’t have any proper bowl to eat it, soooo … Simply ate it straight out of the pot =D Soooo good! 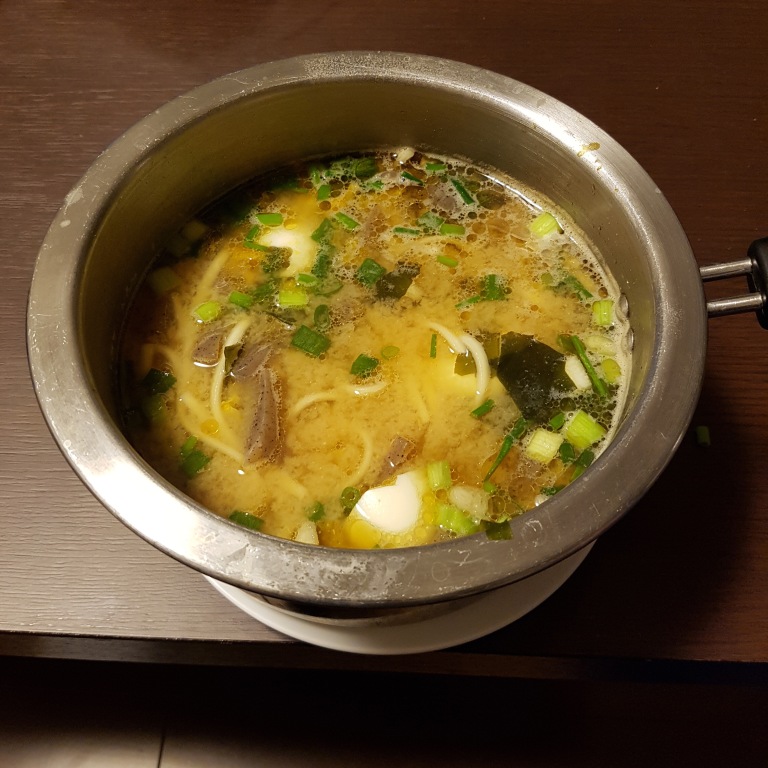 Wednesday was Katsu day. With some cabbage salad and a ball of potato salad. I really love that restaurant! And for dinner I had my team over at my place and we had a Burger party. I made 4 different kinds of burgers — Triple Crisp, Chicken Curry, Classical and an experimental pepper sauce one — and 5 burger of each kind, for a total of 20 burgers. It was a fun party with a lot of drinks — and I got a bottle of sake — and a lot of food as I additionally made some fries and guacamole, and my teammates bring chips and ice creams.

The next day — as my kitchen was a pure chaos — I didn’t have breakfast at home and just picked up some “Donuts with Bean Paste” from the convenience store. They are so yummy, not to sweet but just sweet enough.

And for lunch it was cold Soba noodles topped with Nori seaweeds and I guess grated daikon. Additionally you can add some green onions and wasabi — which I did — for more flavors. I really liked it. And as side dish, that stir-fried veggies I like and some rice topped with powdered pickled plums. I need to find this powder cause it so nice on rice. For dinner simply had some grilled fish on rice.

On Friday, I forgot that we had the lunch Seminar so didn’t have any food and had to run under the rain to get some Onigiris from the convenience store. By the way, simple onigiris but really yummy, I should try to do some at home. Then in the evening there was a “Farewell Party” at work with a looooot of food and even more alcohol. So I had some sushis, some deep-fried  potato thingy, some “Chicago style” pizza — but mainly sushis as everybody was excited about western food and I prefer sushis =D —  and drunk some beer, wine, sake — and red sake which is like a mix of rosé and sake — tequila and some Yomeishu which is like sweet sake with a ton of herbs. And most of all I discussed with a lot of people. So it was very lovely.

And during the party we decided to go out for a drink on Saturday. So Since we finish quite late on Friday, I woke up late on Saturday, and mainly took care of my flat and rested. Then I started walking to Ibaraki-shi station to go out, and instead of going through the town, I took the road passing next to the nearby Golf club. Really lovely walk, very calm but a little bit longer.

So I arrived at Ibaraki-shi station a little bit early and waited there, but nobody was arriving. I started thinking that perhaps I misunderstood something and as I don’t have a Japanese phone number I was a little bit worried. But a colleague of mine arrived soon after and explained me that it will be only us as everybody else is still hungover from Friday’s party. So we tried to go to the best Yakitori restaurant/bar of the area but it was fully booked — next time we will reserve >.< — and walked around and got to another Yakitori restaurant: とりのねぐら 阪急茨木店. It was a very lively restaurant with a lot of figurines around the shop. We got places at the bar in front of a collection of One Piece figurines. 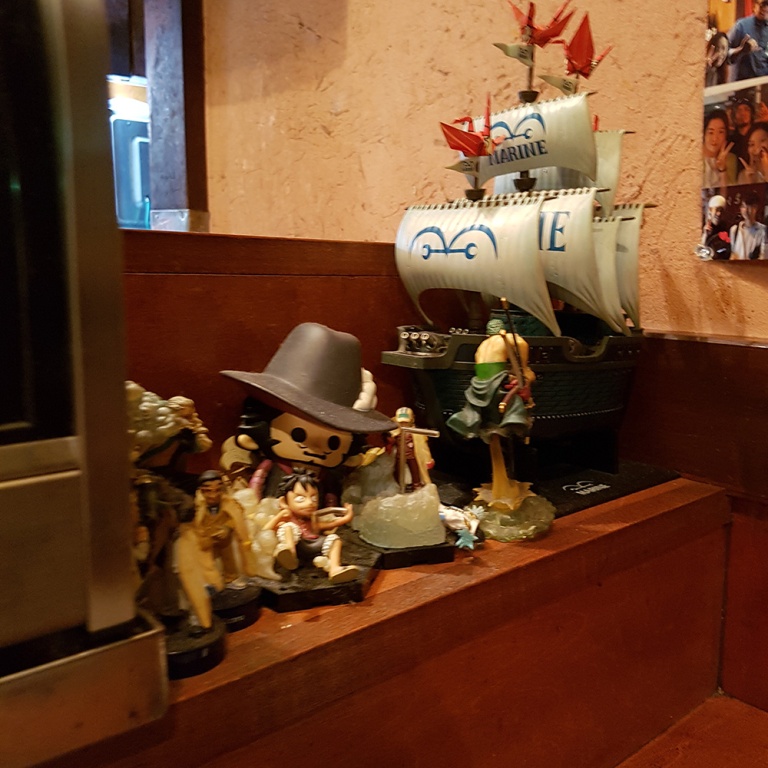 Started with a beer and the sort of Karaage in sauce.

Then we started getting all the different dishes. With first chicken sashimi, served with soy sauce, soy and vinegar sauce, grated garlic, ginger, wasabi and chili. Just soooo good. Then we got raw octopus with diced wasabi, a must try definitely.

Then the plate of Yakitori arrived. So I guess it was 4 of simple chicken, 2 traditional scallion and chicken, 2 chicken hearts one and 2 of some other chicken organ. Everything was delicious. On the left of the picture you can also see some tofu with wasabi and sliced perilla leaf. 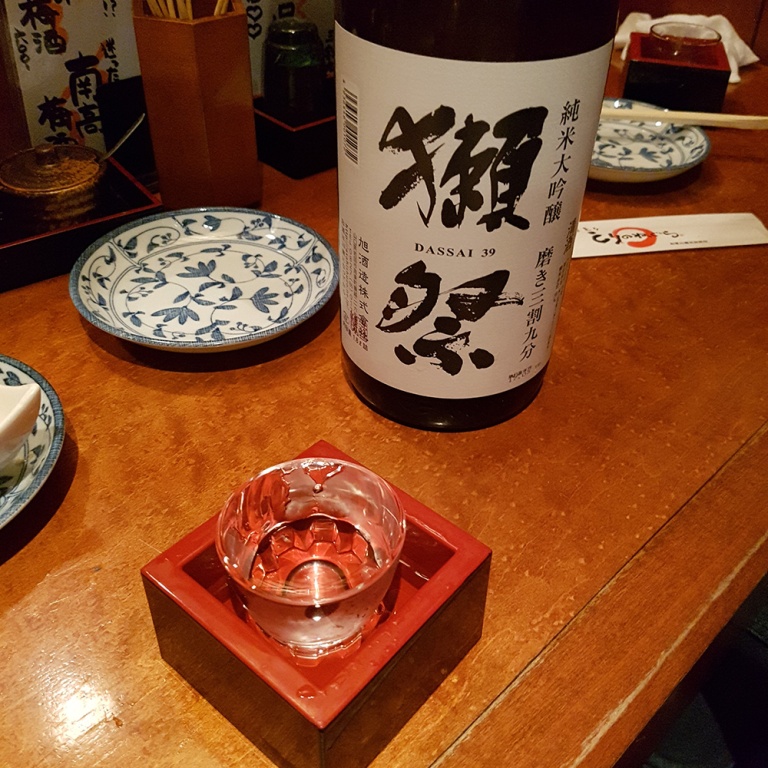 Then we had some chicken meatball in sauce and with cheese.

And my colleague explained me that this Yakitori restaurant does also Okinawa — that the Japanese tropical island — style food. So we shared some Okinawa style udon with pork and pink ginger. I really loved that restaurant and Yakitoris in general.

Then it was time to drink. So we went to a bar called the “Lazy Bar”. It is a very lovely bar with a big choice of drinks. And the barman was really nice. So we had a lot of drinks, like really a lot. Going from Hawaiian vodka — very good one — to whisky, awamori, sake aaaaaand I finally tried Absinthe. Really a nice evening, but the walk home is still a pain >.<

So today I woke up late again, and had a lazy day with some cleaning, watching stuff and etc… I was slightly hungover in the morning but it went away pretty fast. And as I really enjoyed yakitori, I decided to try to do some at home but without skewers and grill. So I created the “Lazy Yakitori” that you do in a pan. And I must say it was pretty good, so will publish the recipe in the next days. 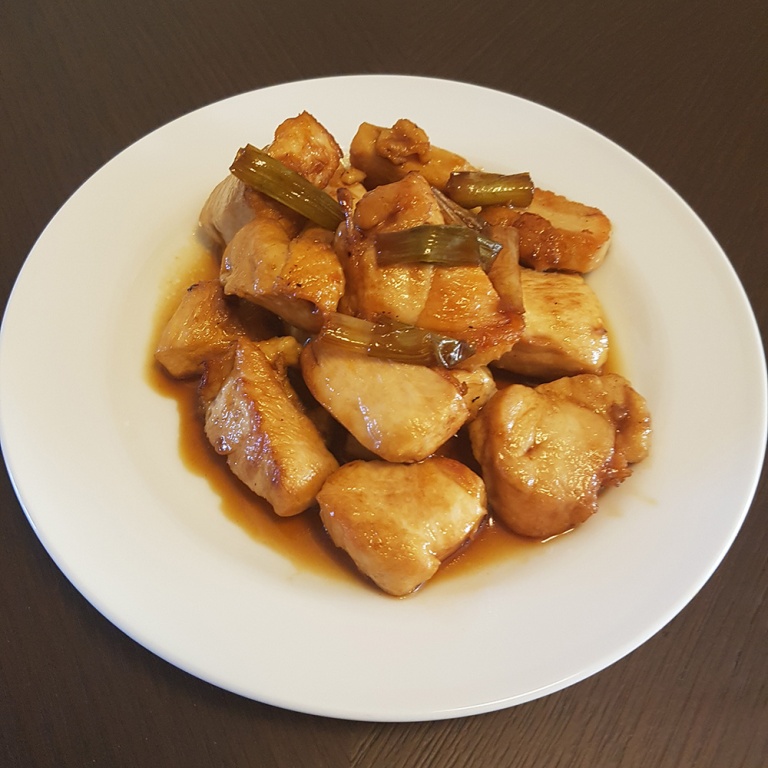 Now will go to sleep so see you next time! 😉

One thought on “Japan: Week 5”