The week is now finishing so it’s time for a post.
I had a lot of yummy stuff this week too and finally got my first “Holly Molly! Just why?” food moment in Japan. 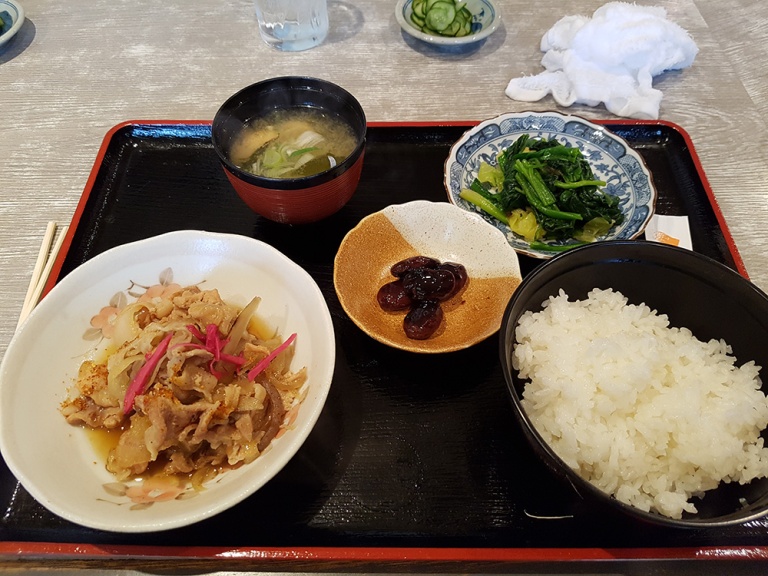 So let’s start from Monday. So I had lunch as always as the lovely restaurant on the side of the campus. This time there were some meet with cabbage and pickled ginger in some sweet broth and as side dishes some blanched veggies and some big sweet beans. Everything was yummy and I was quite surprised by how sweet those beans were. 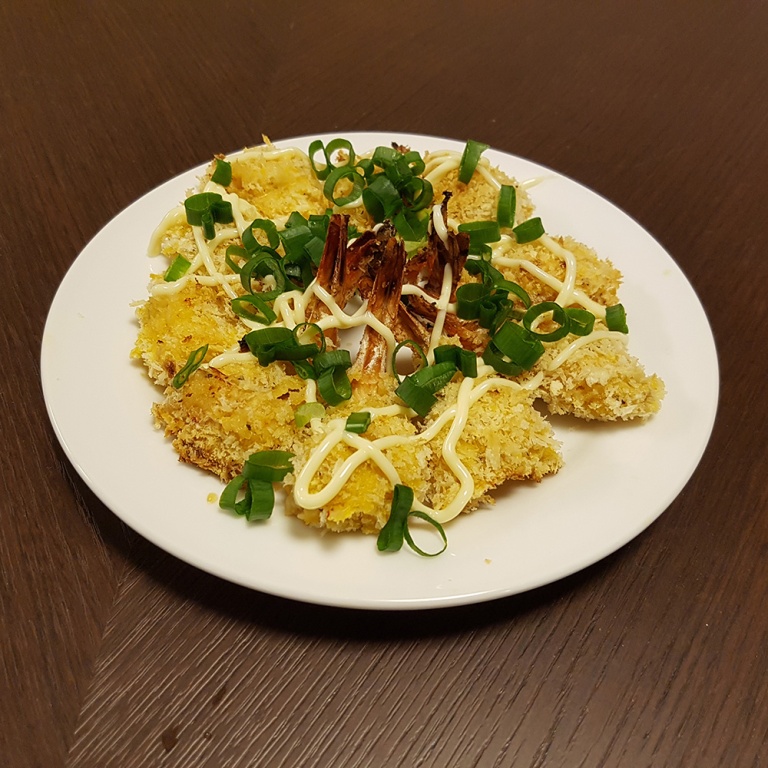 For dinner I decided to experiment a little bit. I made a marinade from rice vinegar, sesame oil, soy sauce and whisky — why whisky? Hum good question… Why not? =P —  that I used to quickly marinate some butterflied shrimps that I then breaded and cooked in my “oven”. Yeah I say “oven” because I am not sure if it is an oven, it’s like super small — about 5cm on 10cm — so perhaps it’s more a grill than an oven. And since I’m struggling with learning Japanese I did not really know what to press so just pressed random buttons and it somehow worked out ^^’. In the end it wasn’t bad but a little bit too bland so will have to improve that before presenting a real recipe to you. 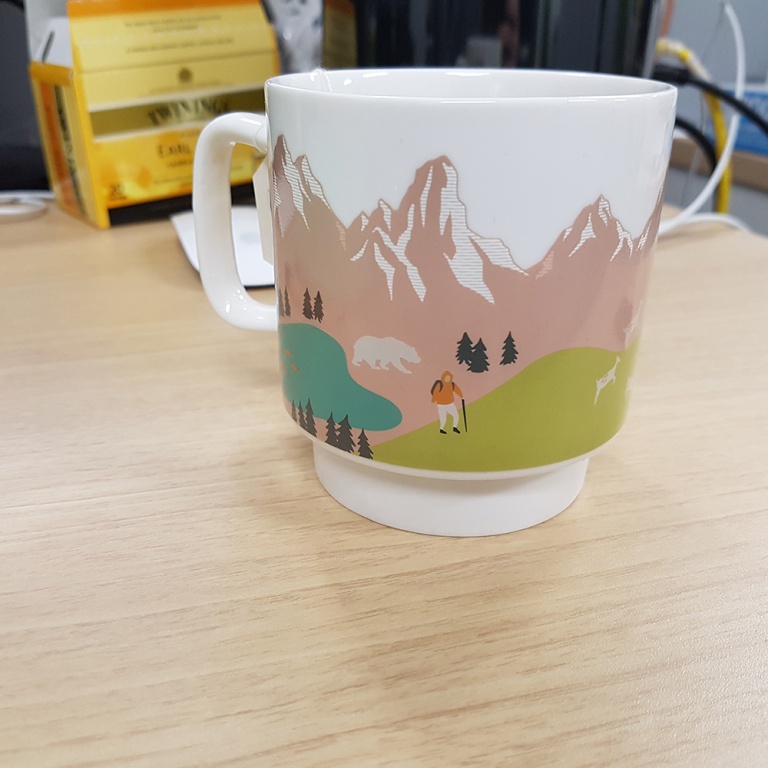 Tuesday started with a discovery. So on Saturday I bought a cup to be able to have tea at work — I was using a cardboard cup before — and so I took it to work on Tuesday. I made some tea and came back to my desk, looked at the cup and was surprised that it changed the design. So actually it is a Thermocolor cup that changes the design depending of the temperature. So when it’s hot it is as on the picture, when it’s cold all the colors turns black so you just have dark mountains. So it was a cool surprise. 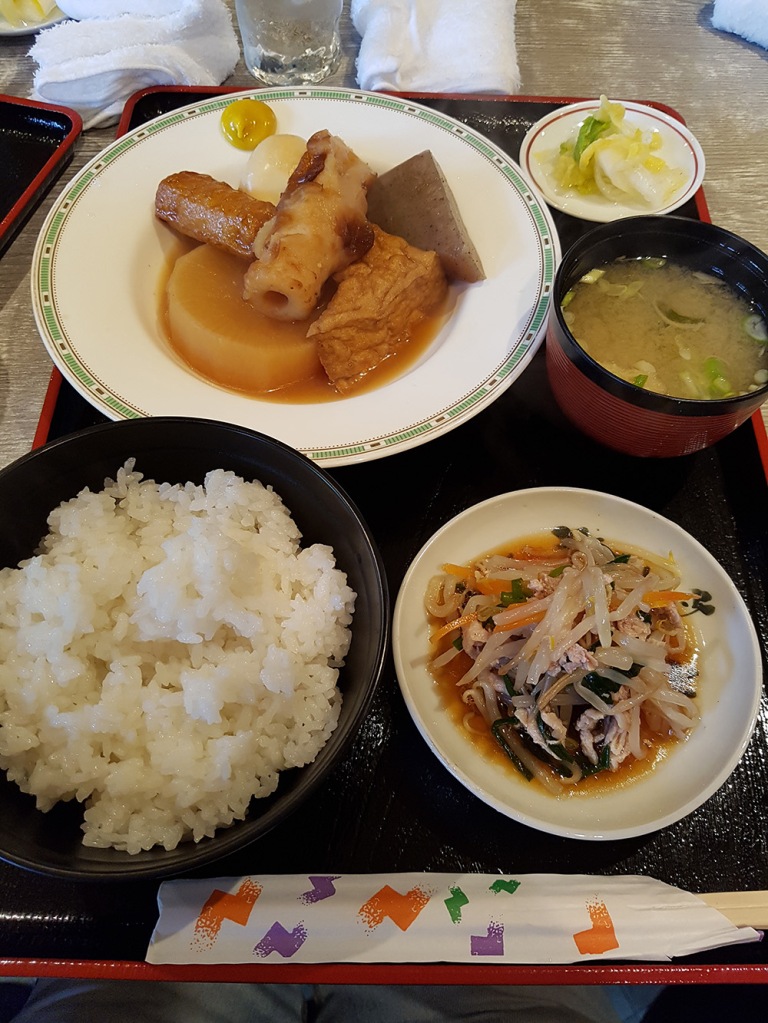 For lunch that day there was Oden. Very yummy and just perfect for that day as it was pretty called outside. It had some fried tofu — I still don’t understand tofu, it’s too bland to me –and egg, some daikon, konjaku,two other things that I don’t know what it is ^^’.

For dinner simply had some of my curry that I made on Sunday.

On Wednesday, we had some visiting student in our lab, so we went to eat with them in a cafeteria on the campus. I had my first (not instant) ramen but was so hungry that I forgot to take a picture >.<
As I was struggling to get motivated to do my fitness of the day — yeah I stated from Monday to do one to one and half hour of fitness every day — I decided to get some snacks on the way home. So After the fitness I finished the curry and had a snack party. So from top left to bottom right: 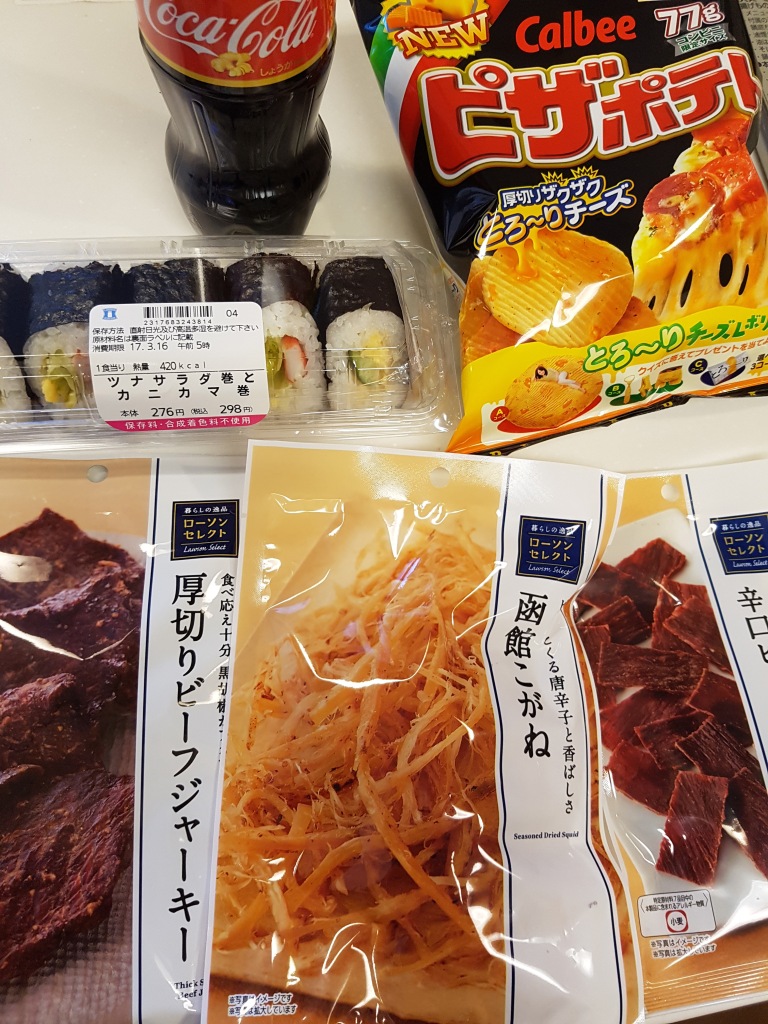 Thursday, back at the restaurant with some delicious Katsu, cabbage salad and beans and seaweed salad. really tasty. 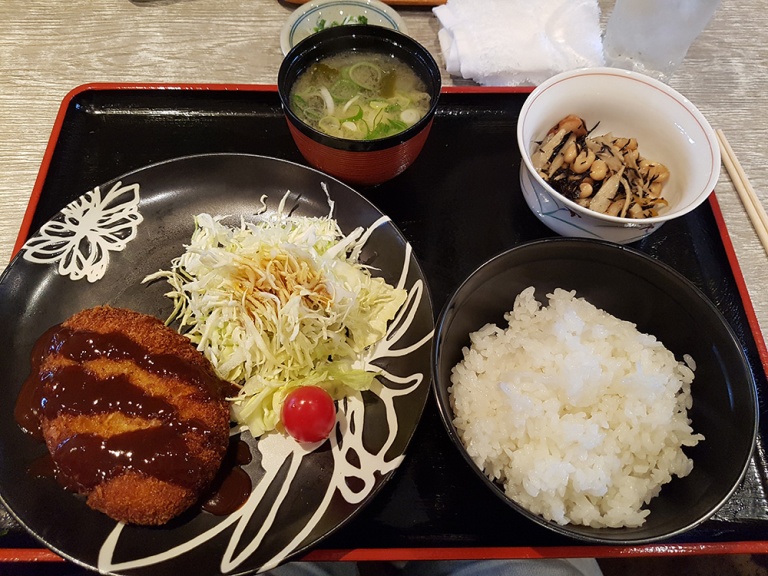 For dinner first did some fish but was still hungry and had some chicken breast that would go bad if I did not cook them so I did an experiment for an idea of recipe I had. I was asked a long time ago by my sister, what a Russian burger would have in it. At that time I just answer joking “Red caviar and black caviar” as in the picture of the “Russian Big Mac“. But I finally got an idea this week after watching some Russian recipes done by a funny guy on Youtube: “Shashlik Burgers”. Shashlik is the russian way of doing barbecue and generally the marinade is quite simple. For example my mom simply marinates chicken in a mix of vinegar, salt and onions. So I thought of a recipe that I will present you later when I try it. But to come back to Thursday, I simply marinated a chicken breast in that simple marinade and cooked it in a pan with the onions from the marinade. I added some mayo and ketchup on the buns and served it like that. Aaaand… It was pretty good. I think my final idea will be pretty awesome =D 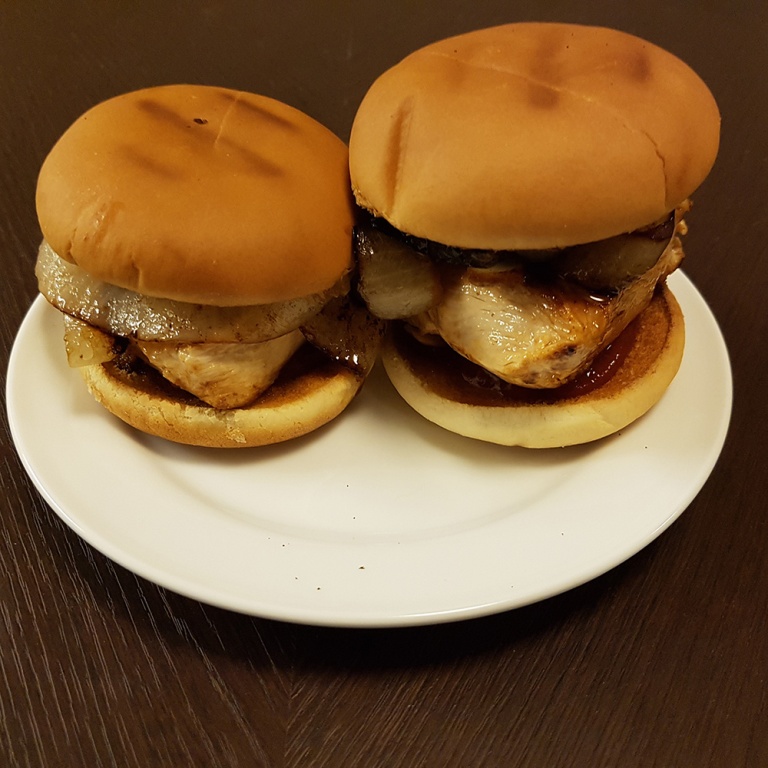 I additionally got myself a little Japanese bread that I thought was sweet. So I had it as pudding and NO! Curry filled bread! It was still yummy but I wanted sweet >.< 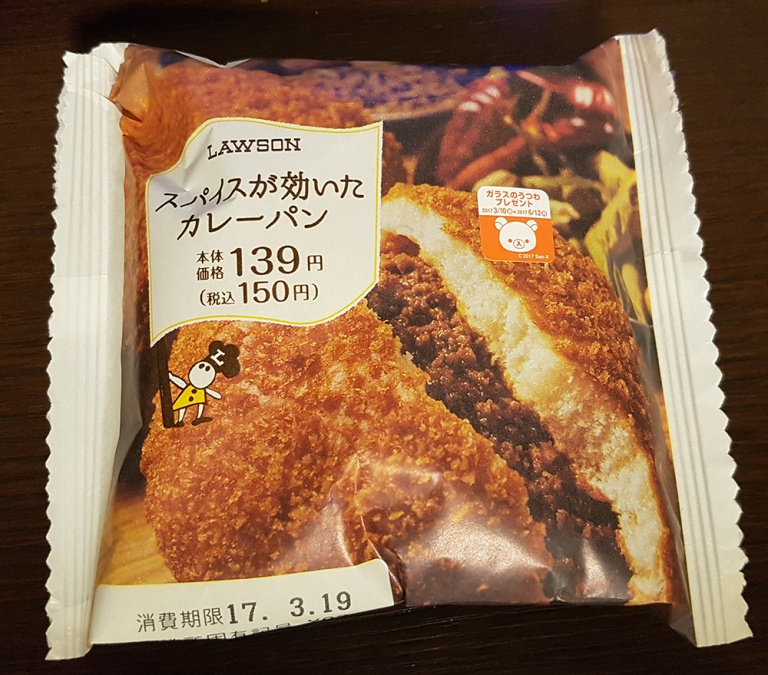 For the Lunch Seminar of Friday got a take away from the convenience store with a variety of fried stuff. Pretty good. 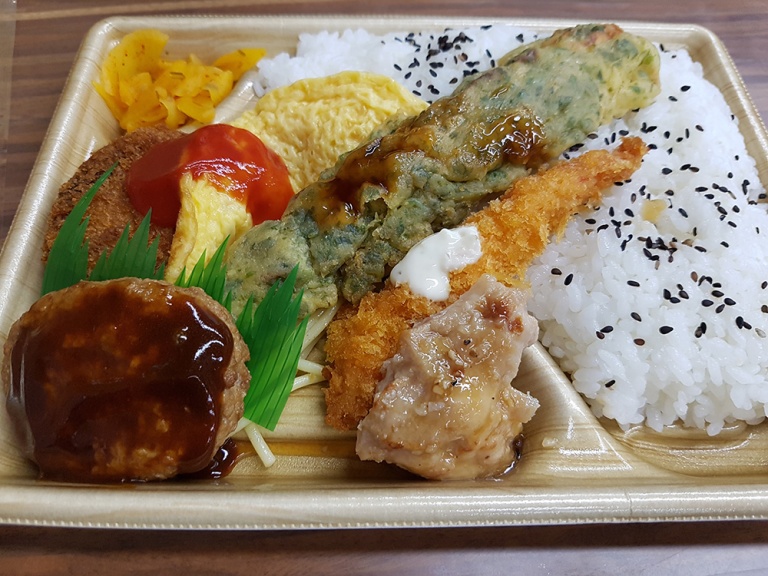 But for Friday night I got some cool stuff. As a starter, sushi — I really love it, could it it everyday without a problem, except for my wallet — followed by some Karaage, love that too. I had some plum soda with it. After that, beer and dried squid and cheesy crackers. And finally mini donuts and an ice cream waffle. That waffle really reminded me of Russian ice creams, made me ever more happy about that dinner! 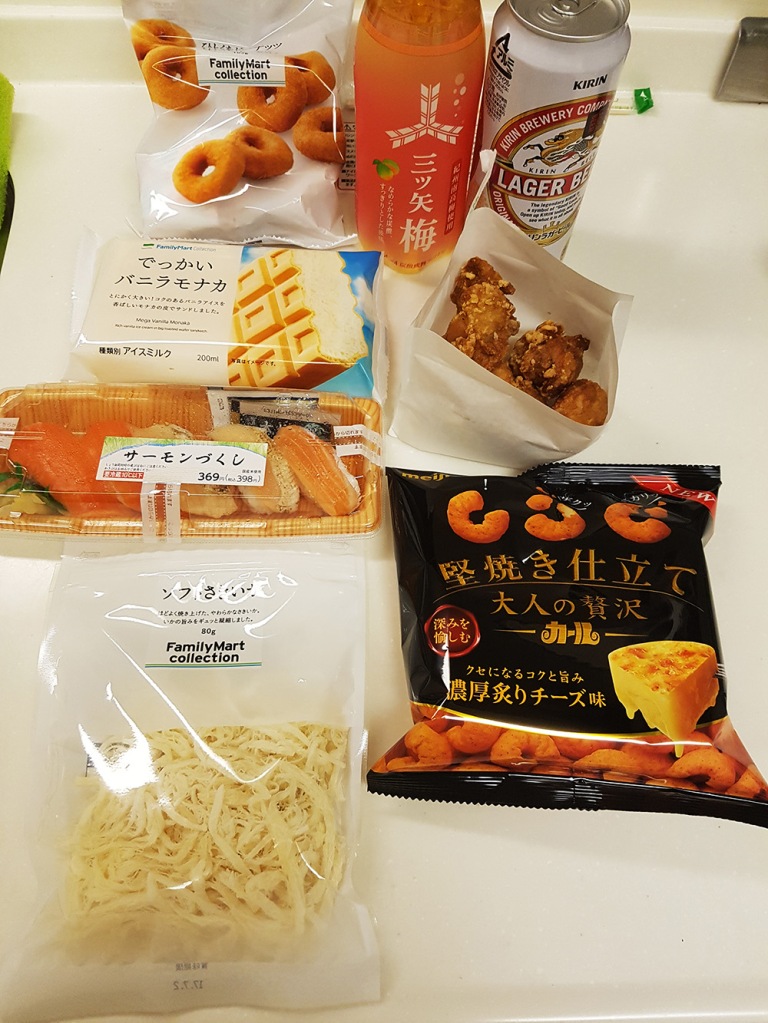 On Saturday morning went to do some groceries, took care of the laundry and in the afternoon left to meet up with a teammate for a drink. As I am a little bit tight with money this month, I walked to the meeting point. It was a nice one hour walk through the town of Ibaraki. 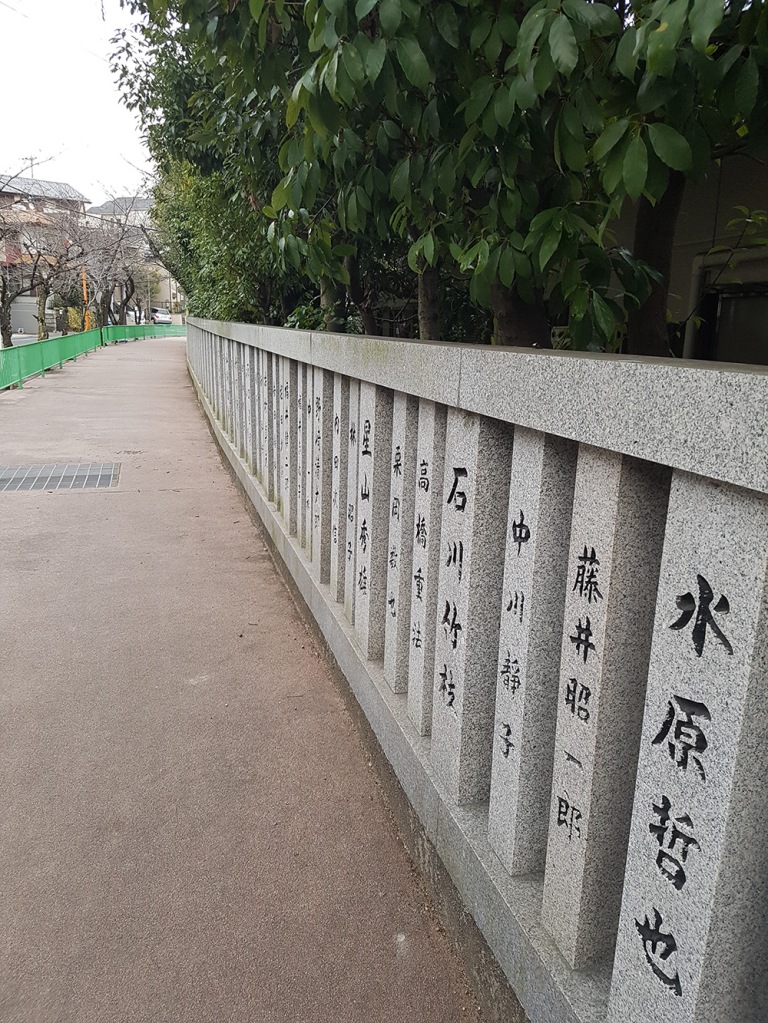 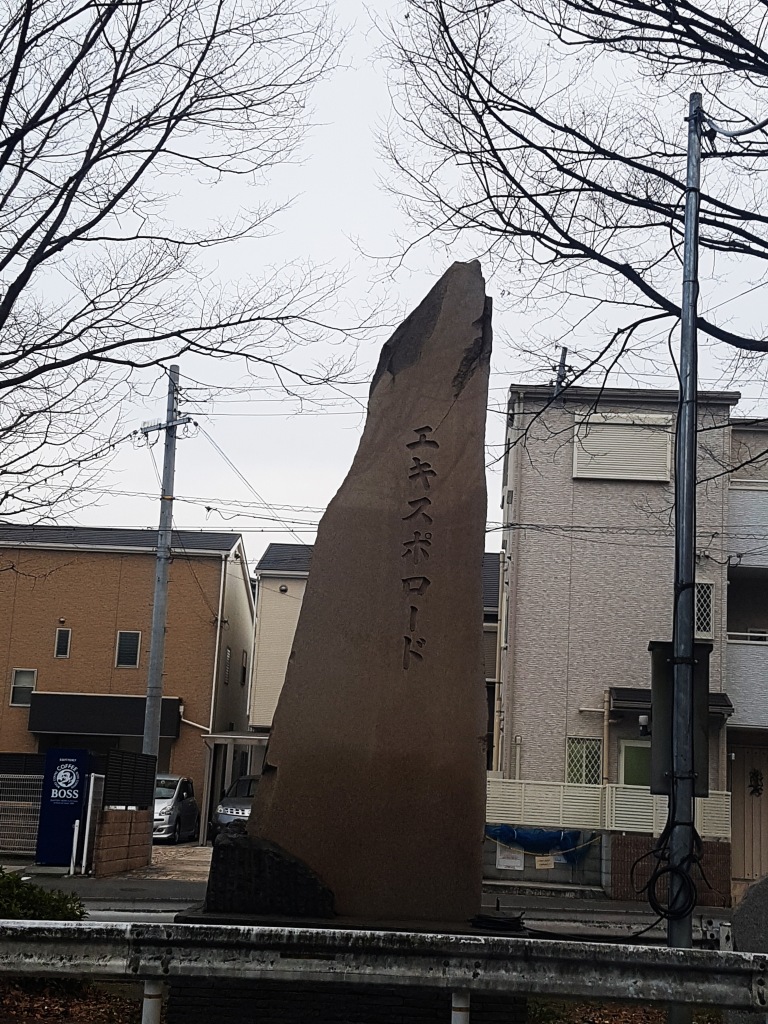 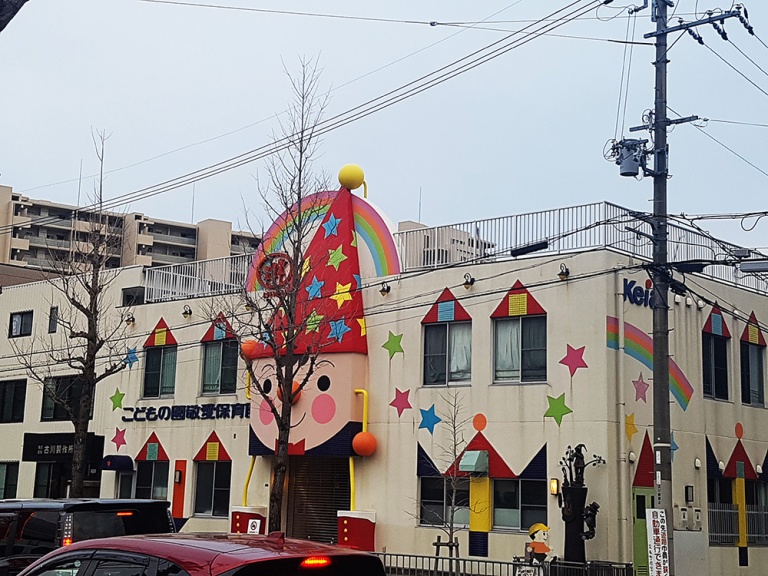 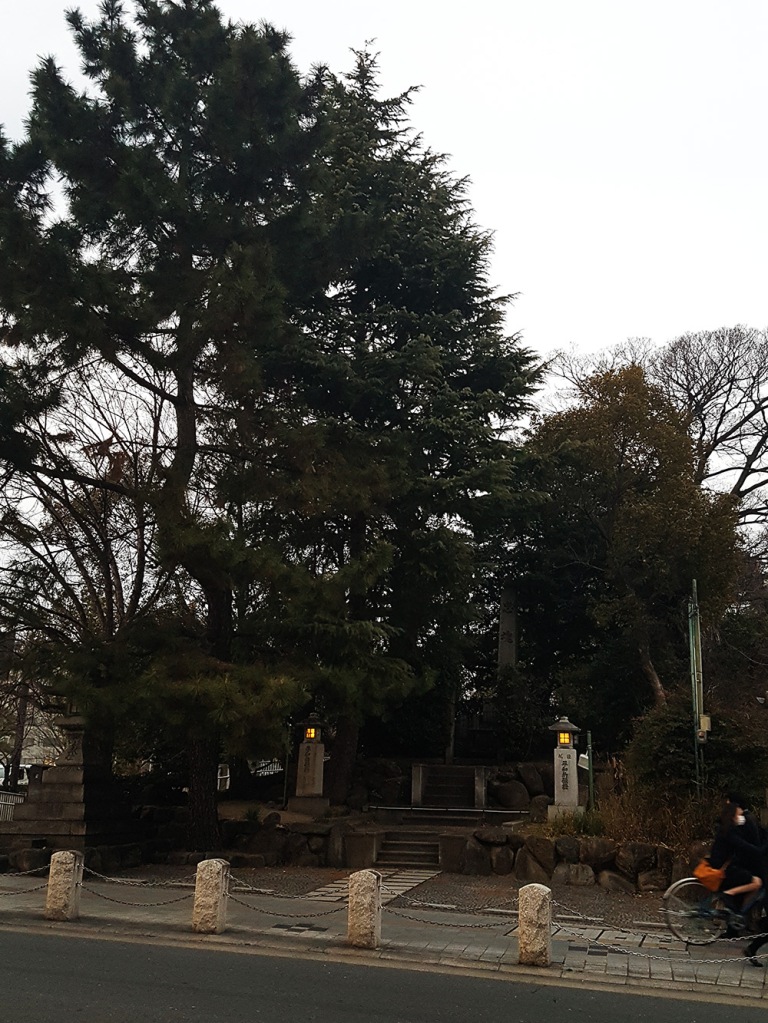 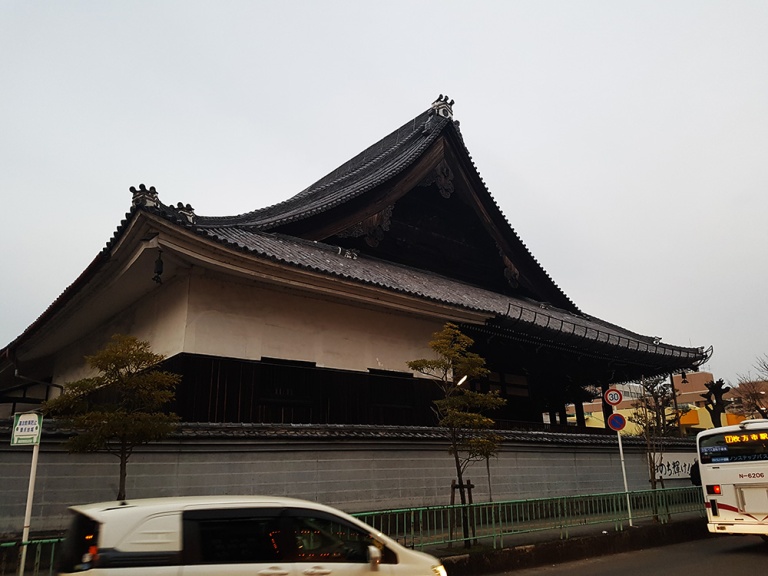 We met at Ibaraki-shi station and he showed me around the area. Then we went to a lovely small bar — like for maximum 10 people — and had a few pints of beer and some smoked food. The owner was in a St-Patrick mood wearing an Irish t-shirt and a Leprechaun hat. Then our boss joined us for one more pint and a spicy pizza with smoked fish and egg. Actually it was very tasty. 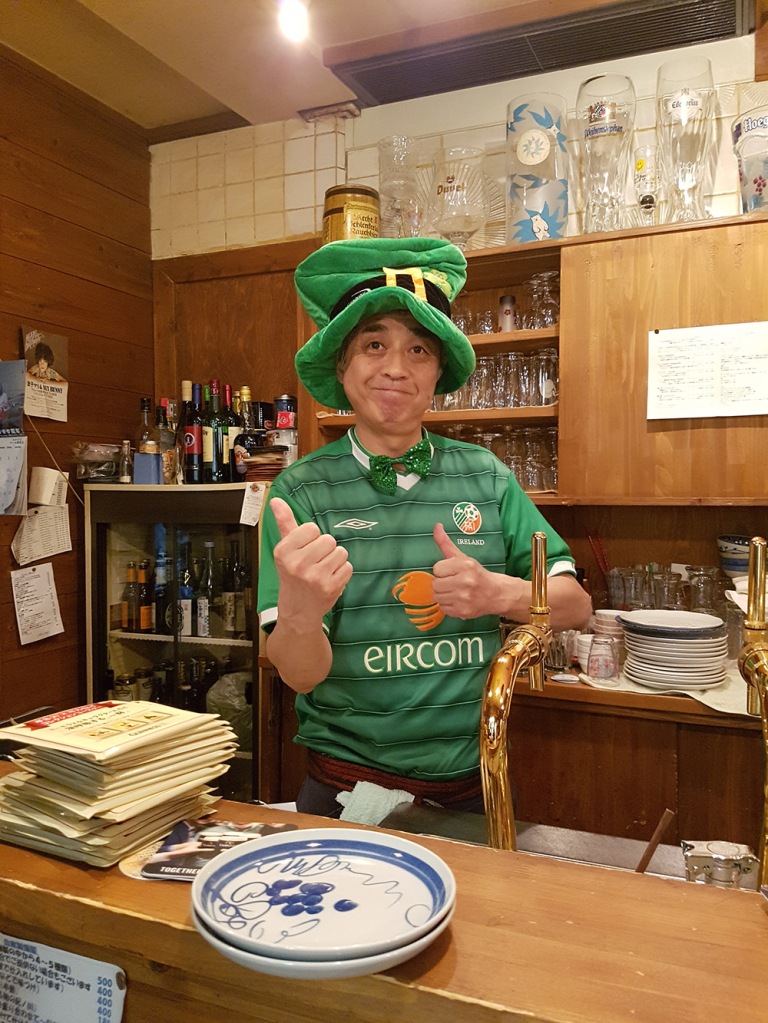 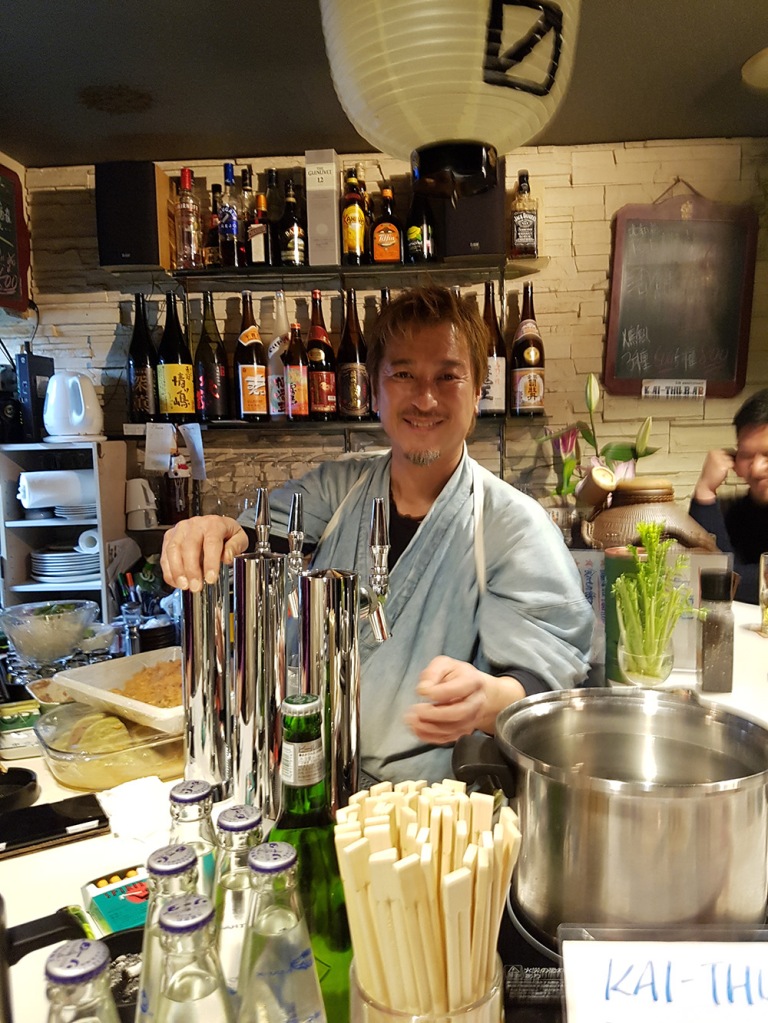 We had one more beer with some Japanese cabbage and beef roll. Then we got shoshu. I had brown sugar shoshu and my teammate had rice one. The taste is quite different. And as final dish of the night we had Chicken Sashimi. I know you are like “What the hell?” but in Japan they are extremely strict with food and the quality of chicken is so high that you can have it raw in restaurants. It is not actually raw, it is seared at very high temperature on both side, so it even has a slight burn taste. But it was very yummy. 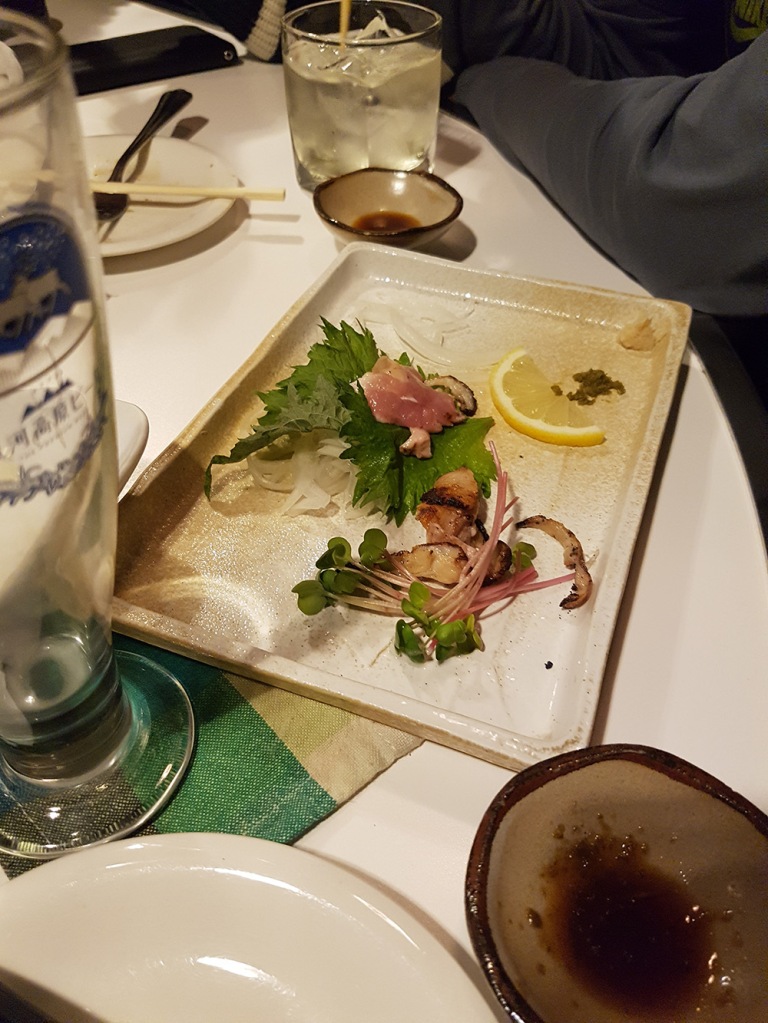 After that had to walk home for one hour, totally drunk and already getting a massive headache. I somehow managed to do it and even got a Apple-Peach-Mango water on the way. But it was tough. Crashed in my bed until lunch time on Sunday. So on Sunday — today — I was quite hungover so stayed at home in my “Slime” mode. But still had lovely food. For lunch I warmed up some Unagi — caramelized eel. Soooooo good. 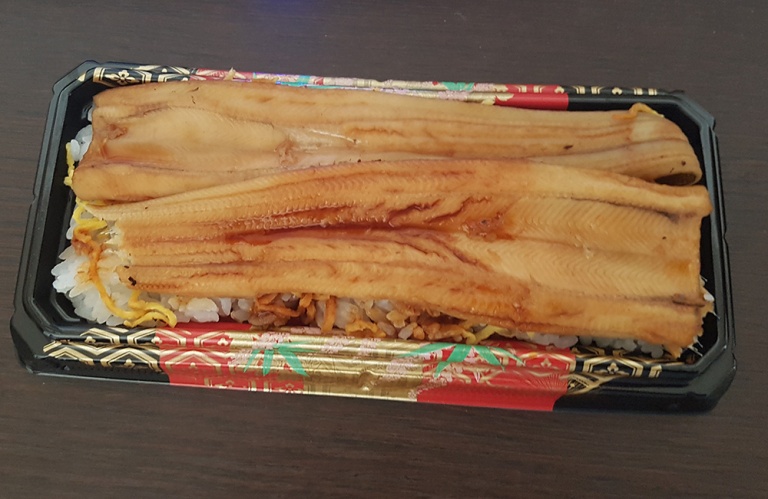 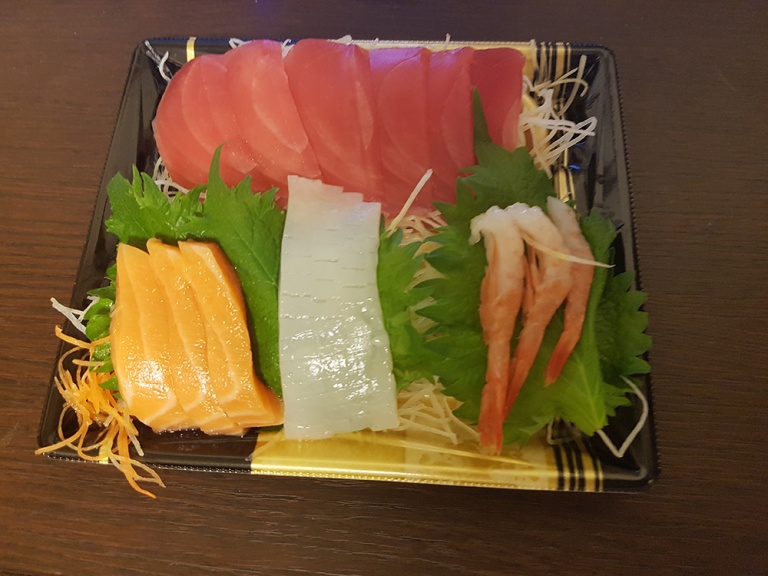 And now I am sitting and finishing to write this post and really wonder if I should go get some waffle ice cream at the shop.

See you next week 😉 And have a lovely week.

One thought on “Japan: Week 3”